skip to main | skip to sidebar

Check out this slide show from My Brother's Keeper III. 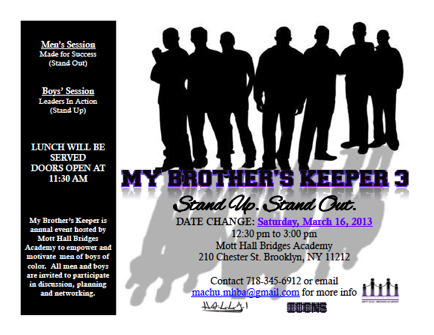 A Journal About the Tragedy in Iraq

Most people probably think persons in prison only care about their own troubles or about getting out of prison. While not totally far off, there is always time to think about the world and its problems. Being one of those persons, I am going to share with you a journal entry penned in Green Haven Correctional Facility around 11:30 pm in a cell block 'G'. It was written 10 years ago...now 10 years since the beginning of the Operation Iraqi Freedom.

I was listening to live coverage of the opening air raids on WCBS-AM on my black GE Super 3 radio. Sitting on my cot under a 25 watt bulb I wrote:

The war, invasion, robbery, genocide of Iraq has begun. The first strikes started about 8:45 pm last night. It was troubling as I heard it live on WCBS. The barrage of missiles, to be honest, brought tears to my eyes and chills to my skin. The emotions came not from the sounds itself, but from the thought of lives being lost. The kid whose mother's health is bad and whose father was killed by US fire. Or the lonely aged widow scared to death in her home from the sounds like that of great boulders falling with thunderous crashes as it hits a building. The five year-old girl crying he lungs out because she's scared and frightened from her ears and eyes but can't quite comprehend what is happening. The US soldier who died from Iraq fire, but only joined the military to get money for college--trying to get out of the oppressive and violent 'hood. My mother is due to return to New York [from Trinidad] today. Can you imagine how nervous and paranoid she is getting on that plane? As America, the self-proclaimed world police, portends that their intent is to liberate the Iraqi people, to give them the opportunity to pursue life, liberty, and the pursuit of happiness while millions of minorities can't obtain those very same ideals by the same government that claims to proliferate them for the rest of the world. There are approximately 23 or 28 million people in Ethiopia starving from famine worst than suffered during the 1980's. Why isn't America seeing to it that this famine is eradicated? Surely money isn't an issue for the US because security for this war costs NY alone $5 million dollars a week!

Enough to bring tears to any ones eyes.
...the saga continues

It's about to go down. I'm feeing like it's time to take my blessing to write in a way that matters for things that matter to another level. Ideas are flowing and the motivation is there.
Posted by marlon pens. at 9:06 PM No comments:


At Riverside Church with some dope panelists. Check this out:
Posted by marlon pens. at 8:54 PM No comments:

Check out this excerpt that I had published in Gawker.com :

Welcome to the new pensfromthepen blog! This marlon peterson, a young man that has been blessed with skills and talents that he once squandered, but now utllizes those gifts to positively influence others. I am discursive. I am humorous. I am contemplative. I am critical. I am conscious. I am winsome. I am ME & YOU.

Enjoy my writing. Criticize it. Add to it. Take away from it. Be proactive about it.

Well, I am blessed to be able to say I have accomplished a few things during the past 12 months. I finished at the top of my class at the Exploring Transfer Program at Vassar College. I was accepted to Vassar and NYU for the Spring 2011 semester. H.O.L.L.A.!, Ink. is progressing, and now I have a partner/Associate Director, Terrell Tate. Family is well. My nephew is finally playing bball at Kansas St. after many obstacles.

One year later, I sit at this computer and ask myself, "Where will I be next December?" Where will I be???
Posted by marlon pens. at 7:39 PM No comments: